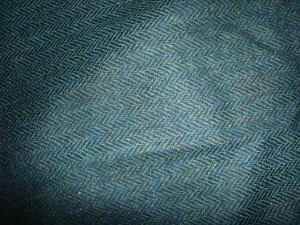 Sometimes projects go together easily, other times they fight you every step of the way. I got this yellow blue reads as teal herringbone wool last year with the intent to make a kirtle. With it I had ordered some black wool for a fitted gown. However fabric.com ran out of black wool and I put the project on hold, not wanting to start without all the fabrics I needed. The teal wool sat on the time out shelf for a few months as I started to question if it would work well as a kirtle, or would it read like a modern-day wool suit.

One night I took it down and decided I was going to cut the fabric, the kirtles I’ve made so far as plain and I wanted something with texture and personality.

I traced out, cut and sewed the skirt in an hour and a half. The skirt half is unlined and I possibly over engineered it by using french seams on such a bulky material. But it gives the skirt a bit more body and structure. With the skirt done I started on the bodice, it has two layers of cotton drill machine zig-zagged to muslin, which in turn was flat lined to the wool. I turned the edges of the bodice down and herringbone stitched them to the interlining. The bodice lining is a linen cotton blend that I put in by hand with the whip stitch. 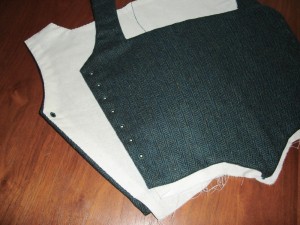 The kirtle closes with eyelets on each side, sewn with green silk thread. Sewing through the bulk of the wool proved a challenge and I would not grade myself on the neatness of the eyelets on this project. In the end I got them done and that was all that mattered. The back of the skirt is knife pleated using the fork method, it worked out rather well. I left the front side of the skirt over long and hemmed the top and side edges to form a mini placket. When the skirt was attached I let the hem drop, at the time my dress form was in use so I tried using my hem marker while wearing the kirtle. I tried it two different times with no luck to get an even hem. Finally I took all the padding off my dress form and marked it that way. By then I had already cut them hem once. The hem feels a little short to me, even if it is just about the right length for doing actual work. I finished it off with the overlocker to keep the wool from fraying and self bound the hem with scraps of material.

The sleeves are from a new sleeve block, in a fit of laziness I did not want to draft a new one so I wrapped my arm in tin foil, taped it in place and carefully slipped my arm out of it. a bit of tweaking and I had a pattern that fit the shape of my body’s armscye. The sleeves are just tacked in place with the whip stitch. There is a little bit of pulling on the bodice straps which I will rectify in the future.

*edit* Adding in here that I have no documentation/evidence for the use of herringbone wool in the 16th century be it England or otherwise. I based my use of the fabric off the Pisa “house gown” made of a patterned twill http://cockatricearts.blogspot.co.uk/2011/04/extant-dresses-in-pisa-updates-on.html in that the herringbone wool gave a similar textured feel. Since I do not do living history I’m ok with this as my personal choice, but I would not use this in a kit until more information comes to light. 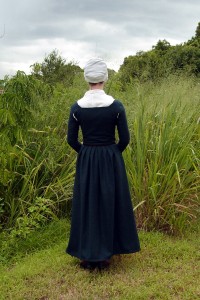 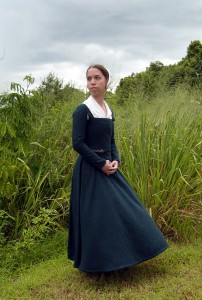 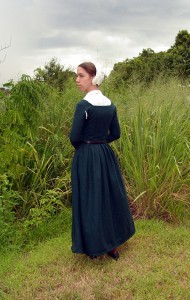