I’ve been working on the corset I promise.

It is taking me longer then usual because, in a fit of “well it isn’t that much work” I decided to sew the corset, boning channels and eyelets and so forth all by hand with silk thread.

This is not so much an exercise in insanity so much as wanting to see what I will learn from the experience, and so far I’ve learned a lot.

Like use a thimble, because your skin is not as tough as you think it is.

Take breaks so you don’t put too much stress on your wrists.

The cat will sit on your corset no matter what, and leave it covered with fur.

Ok, so the last two have nothing to do with sewing but I did get a lot of sewing done because of them. With the exception of the cat. 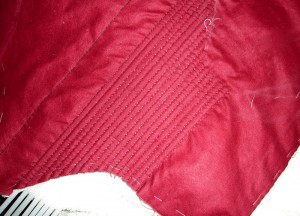 But after an hour and a half of Hamlet I did have this:

Slow going but not too bad, once you get into sewing with the back stitch there is something rather Zen about it and I managed to finish that side of the corset by the end of Hamlet.

The corset then got set aside for about a week as I worked on other projects and took care of some family concerns.

That was just long enough for my brain to wipe out all the useful hand sewing information it usually holds on to, and I found myself unable to recall how to do the back stitch.

So I decided to make myself a diagram just in case it ever happens again and I can’t find my sewing books.