Where we last left off I decided to make a test draft of the Alcega pattern in newspaper, it won’t show me the drape of the fabric. But it will give me a better idea on layout, as my fabric is not as wide as the rash cloth.

Painter’s tape is useful for many things.

I then set about to tracing around the pattern and adding seam allowances. When I reached a point where the pattern over hung the fabric I folded it back and cut along the fold so I would have the perfect sized gore. 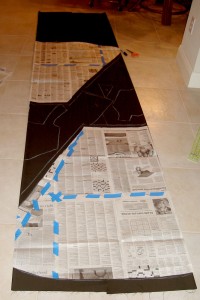 For the bodice pattern I had a mock-up with me that was similar. So traced along that, adding an inch to the top of the center front to give it the slightly arched neckline. I did the same for the back and then carefully cut out my wool.

I knew I was not going to line the skirt of the kirtle, But I also did not want machine zig zag stitching or a serged edge to show, and I was without my sewing machine. So I decided it would be a good time to try Laura Mellin’s technique for an Elizabethan seam.

My seam allowances were 1″ so I carefully folded each edge in 1/2″ and pinned it down to the ironing board and pressed. Then once it was cool I folded it over again and once more pressed. This gave me a guide to follow that was reasonably even. If I use this method again I think I will make a folding jig to help speed things up.

In most 16th century clothing linen thread was used for basic sewing, however I did not have any with me. So I used black Gutterman silk thread which I waxed with bee’s wax for extra strength. In the course of 2 days* I sewed the skirt together, pressing the seam allowances down as I went. The sewing method was enjoyable, and gave me a sturdy seam that did not affect the drape of the skirt.

With the skirt finished, save for the hem I was ready to start on the bodice.

*I do not recommend this, I had lots of time on my hands and really wanted to sew. But there is such a thing as too much sewing when your fingertips really start to hurt. Lesson learned…at least for now.