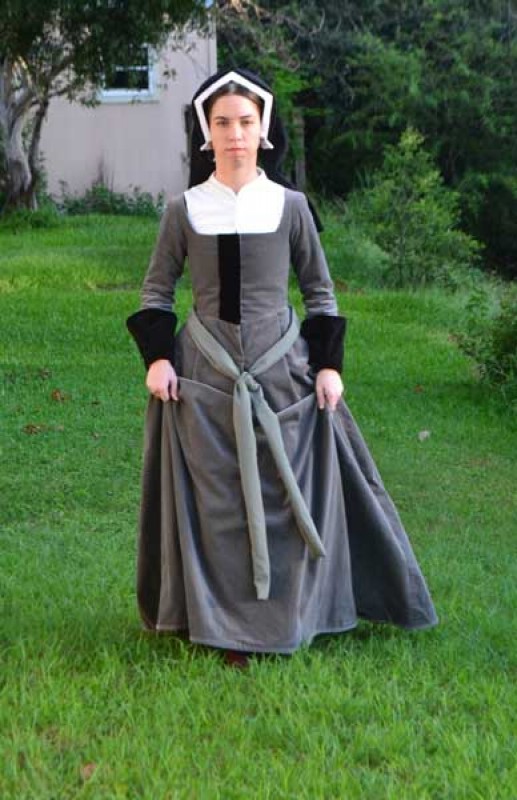 About three or four years ago I was gifted 6 yards of grey uncut corduroy for Christmas. I had intended to use it for a Spanish gown but the fabric lurked on my shelf untouched. After the Tudor Tailor came out I started to eye the yardage with a bit more interest  When I finally took it down off the shelf it had a bit of damage to it, along the center where it was folded there was a line.

That scrapped my plans on the Spanish Gown, and the fabric sat on my shelf as the fold line haunted me. It wasn’t that noticeable but I knew it was there. Then I came across Holbein’s drawing again and some navy blue wool had come into my possession. I thought aha! I shall make the drawing in the blue wool! But the blue wool was rather nice, and I needed to test my latest pattern block and make a mock-up to make sure the neckline was high enough, oh and there was that overlapping part in the front. One thing led to another and the grey fabric got taken down again, to become a test dress for the blue wool.

This led to a great deal of research on the use of mockado, or mock velvet in period, gable hoods, funeral brasses and many late nights looking at inventory records.

I did not expect to like this dress, but in the end it came together and it feels “right” when it is on. There are a few things I might do differently, set the gores a touch higher, gives the cuffs some interlining so they have a bit more body.

The gabled hood is version 3, made from thin buckram fused together, edged with wire and then mulled with thin quilt batting before being covered with linen. The back box, veils, and lappets are also linen. I have no idea if linen was actually used for these parts. I had some silk in mind for them but the linen was a true black, where the silk was more of a pale charcoal. Eventually I will make a new box and veil and lappet from velvet or a darker silk. 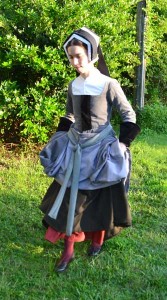 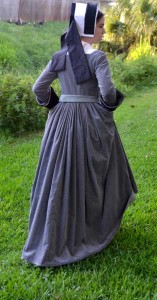 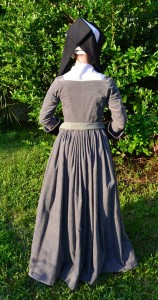