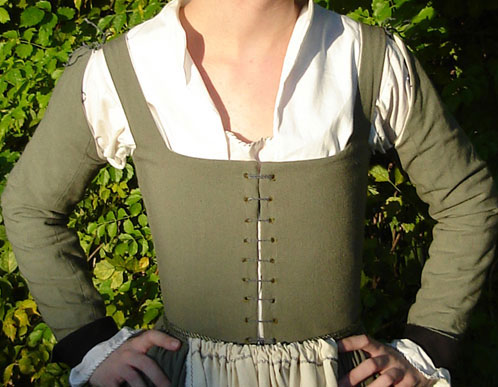 I’ve been busy with not sewing this past month and have directed my energy to a great deal of online research. First and foremost the use of buckram as a gown stiffening has always puzzled me. Was it wet molded to the figure? (Rather unlikely.) How did it hold up if someone got caught in the rain? Is what we think of as buckram the same thing that was used in gowns? My own experiments with what I could get locally it were less than successful, see my Green working class gown which used two thin layers of buckram fused together and the Unicorn painting inspired Gown which used just one layer.

I’m slim, but the buckram still bent and bunched mainly under the breast and at the curve of the waist.

When I started on my version of the “Pisa Gown”. (Currently on hold.) I tried to counter act this by padding out the bodice using layers of cotton quilt batting. I set a layer of batting on the inside of the bodice and a second smaller layer just under the bust to help fill in the space. Laurie Tavan did something similar with her Florentine Gown but wore hers over a pair of bodies.

Yet even with the layers of padding and extra stitching the buckram started to buckle. So I set the project aside. I wasn’t sure if I was going at it wrong, or what I had on hand wasn’t stiff enough/the right material. But I sat on the idea for several months and got distracted turned my attention to Tudor gowns from the reign of Henry VIII.

I read “And her black satin gown must be new-bodied’: The Twenty-First-Century Body in Pursuit of the Holbein Look” -Jane Malcolm-Davies, Caroline Johnson and Ninya Mikhaila. Their findings of trying to reproduce the Holbein look on various body types made sense, and became a deciding factor when I made my green/brown kirtle.

I decided to use no boning in it the kirtle at all for a few reasons, one I was still hand sewing my pair of bodies and I really did not want to revisit a similar boning diagram, and two I wanted to see how far fit could take me.

Using just a layer of canvas rather than buckram allowed for the fabric to form around me, it didn’t make sharp heavy creases under the bust or at the waist. The support you get is not from shifting and holding parts of the body up or in like a fully boned pair of bodies/corset would do. The support comes from being well laced and well fitted, and gives it a soft line. Yes, there are some wrinkles that a few bits of boning would take care of, but as a gown would generally cover the kirtle I am fine with them being there.