First, all the photos!

This project started several months ago before I moved, got married and several life thing reared their head. So my recollection of the construction process is a little fuzzy. After a few late night fb conversations, a friend of a friend needed better clothing for 16th century interpretations. I needed practice doing some men’s wear and pretty much said throw the fabric and measurements at me.

General inspiration from paintings and manuscripts:

The unpaned trunkhose are roughly based on Don Garzia de Medici’s in Patterns of Fashion, and staring at the shapes from Reconstructing History’s trunkhose pattern.  They are linen, lined in a linen blend that is cut shorter than the outer fabric to give them some poof.

They are not stuffed but there is a band of linen to act as interlining about the pleats. I cartridge pleated them at the waist and whip stitched each pleat to the waistband from the outside, as if I was making a ruff. This sandwiches the pleats between the waistband and makes them stand out when worn, the linen band interlining then supports them.

They close with hooks and bars with a wide fly flap underneath, ideally for this era there would be a cod piece, however I have not found much on unpaned trunkhose with a cod piece save for an italian painting or two.

The waistband is just a 2 inch rectangle of linen folded over and pressed down.

The bottoms are cartridge pleated to a linen band that is then folded up and whipstitched down inside to prevent the stitches from rubbing.

Special thanks to Daniel Rosen of http://oldenglandgrownnew.weebly.com/ and other Facebook folks who where kind enough to let me pick their brains on trunkhose fitting and rise depth.

The doublet I drafted from early instructions that would later become: http://www.amazon.com/The-Modern-Maker-Century-Doublets/dp/0692264841 . I cut a mock-up in cotton twill (which was about the same weight at the linen) and took it up to St. Augustine for a quick fitting. I scribbled some notes to myself on it and then had to put it aside as planning a wedding/holidays/unpacking from the move took up a ton of time.

Fast forward a month or two and I take the mock-up back out and look at it, look over my notes and cut the linen with extra inlays and seam allowances. Fitting #2 everything is looking pretty good! I got my kickstarter copy of the doublet book in the mail and I sat down for a few days of cutting and pad stitching. 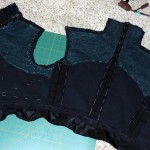 The wool in the chest area is left over medium suiting weight from one of my kirtles it has a lovely body, and I wish I could find more of it. That got pad-stitched to the canvas and in turn flatlined to the linen. I prepped the other pieces, over locked the parts that needed it and the deadline got moved up and I had about 5 days to finish everything.

For the rest of the construction I followed most of the steps laid out in the doublet book.

There is no visible machine stitching from the outside, save for the buttonholes.

All the main seams I machined save for setting the sleeves, I hand set the lining in place so it could be switched out later as needed. The buttons are sewn in using a technique similar to the leather jerkin in Patterns of Fashion, which will allow them to be replaced easily.

The facing fabric along the collar, edges and doublet skirt was going to be a blue rayon, but I changed that to a black silk taffeta, it looks better and will wear better with less bulk. The binding is bias cut strips of linen that I snipped every 1/2 inch to break up the solid color of the fabric and give it some texture. This treatment can also be found on Cosimo de Medici’s clothing.

And in a final fit of too much caffeine I fingerloop braided some points to lace the doublet and trunkhose together.

Over all I think I was successful using donated fabric and juggling several plates to get this project done. The fit is spot on, the use of linen as outerwear is something that is still being researched.

For my first crack at men’s wear I am pleased, I learned a lot and look forward to applying what I learned to the next project.