I have a friend who lives in the wilds of Oklahoma, her local medieval fair runs for only three days. She has needed a costume to attend just for fun but being a fellow history nerd wanted something that would work. Her fair set in 1360, it has a different flavor than my local fair that tends toward the 1540’s which means my go to comfy bodice and skirt kirtle wouldn’t really fit.

A few years before we got some lightweight wool suiting in plum color from Fabricmart and then I sat on it like an egg as we went back and forth over what style of dress she wanted.

We pinned a lot of photos, used historical doll makers to share ideas and when she came down in 2014 for my wedding I got her measurements, drafted a block, and fitted a mock-up.

After recovering from the wedding I got to work on her dress. I padded up one of my forms to her measurements so I could double check the fit of things and chalked out the gown. I used the popular layout for the dress of 4 panels with gores between at the waist for fullness and curved the front panels to provide some bust support. Since I had 6 yards of wool to work with I put most of it into the skirt, setting aside what was left over for sleeves, facing, and hem binding.

Where I differed from other interpretations was in the neckline, some recreations have a scooped neck but if you are not wearing a veil with the gown it seemed like a recipe for sunburn.

Looking at some illustrations from the 14th century, a boat neckline was fashionable so I broke out the french curve and went with that.

I drafted the sleeve pattern once the armscye was more of less finalized. The wool suiting is a gaberdine with a very subtle twill weave on one side. I cut them out and despite bright light, chalking which side was which, and post it notes managed to have to recut the sleeves note once, but three times.

Despite how much I love my friend the dress went into the timeout corner for a little bit.

Sometimes this happens in a project.

I worked on the smock (plain cotton) in the mean time. While she was down she sewed some of it. I finished up the seams, overlocked them, hand sewed the sleeve ends, finalized the neckline, and bound/faced it with self-bias tape.

Then I went back to the dress.

I machine sewed the gores and skirt together, flat lined the bodice section of the dress to some cotton twill, I ran a band of bias cut wool around the neckline and front bodice edges, edge stitched that in place to keep it from rolling and then set the bodice lining in by hand. After that, I set the sleeve in by hand as I found it easier with all the layers I had going on and sewed bias binding over the armscye after that to neaten everything.

Next was several episodes of “The Great British Sewing Bee” for the eyelets and hand chain stitching a long enough cord to use for lacing.

I was feeling better about the project by then, I had leveled the hem, sewed on the hem facing which clocked in at around 5 yards total. (That was a good bit of hand finishing) But I realized it needed something it needed a belt and leatherworking or tablet weaving is not yet in my skill set.

So I ordered some brass filigree stampings and this is where the project takes a bit of a fantasy turn. I cut up the last few bits of wool that were wide enough and made a belt, then hand sewed on about 28 something or other of the stampings. I stopped counting after 10. But for a look at proper 14th century belts please see http://rosaliegilbert.com/beltsandgirdles.html

I set everything up on the dress form smock, kirtle, and belt pleased with how it was looking and realized nope it still needed something else.

To Pintrest! I took a look at various pouches and purses see my Pinterest board here for some of them. Dug out some scrap velvet left over from my Tudor gown and hand sewed a pouch based on the relic bags but scaled up to fit the modern cell phone.

Like King Pellinore and the Questing Beast, the pouch soon turned into a much longer quest that went something like this:

Me: “Ok I made a pouch and sewed a bunch of eyelets, I need something to use as a drawstring I know some ribbon will work.”

Questing Beast Brain: NO scorn thy polyester ribbon! Harken not to thy silk taffeta! Thou hast silk button hole twist thread and books on bobbin lace!”

Me: “I’ve done a few practice plaits, ok well I can make some tassels at least.” 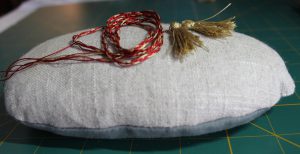 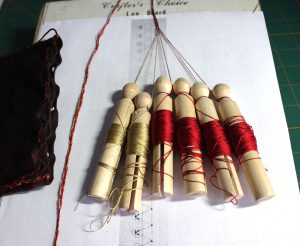 Questing Beast Brain: Fingerloop braid is more period for drawstrings, use the plaits for trim! 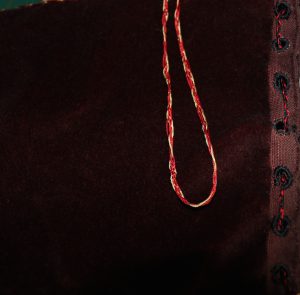 Me: OK OK, But I’m using the plaits for the other drawstring because the colors with match and the cloth stitch that I’ve been doing for 2 days now is really rather annoying. Also silk is not a good material to learn on when you are new at this.