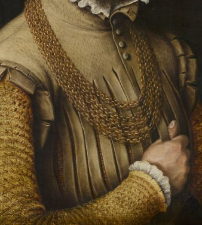 Long have I coveted Scott Perkin’s leather jerkin, which is based off the jerkin at the Museum of London and written about in Janet Arnold’s “Pattern of Fashion”.

But I am not a leather worker*, I didn’t want to get a very nice hide and ruin it with my amateur attempts. So I filed the idea away in the back of my head until one night I came across some leather on eBay. 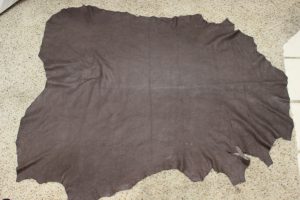 It was cheap and looked like there was enough to make a jerkin, one press of the buy now button and I good. The blitheful glow of a new project set in. I started planning out how I wanted it to look, what buttons I would need, to slash or not to slash?

But then I realized an important question needed answering, did women ever wear leather jerkins?

The common assumption is that it’s a male garment with origins as armor, and possibly evolved into the 17th-century buff coat. (I am not an armor historian if this is incorrect please let me know.)

In “Patterns of Fashion”, Arnold mentions:

“Alcega gives pattern diagrams of some petticoats or skirts (‘saya’) with ‘a jerkin, a little cassock such as women use in Spain’ as Minsheu translates ‘sayuelo’; others are with a ‘cuera’, translated by Minsheu as ‘a Spanish leather jerkin’. The latter is a bodice which has apparently taken its name from the leather from which it was once made.”

The diagram referenced in the quote

Language is a living thing, the meaning of words change. In my look through the English translation of Alcega’s book, I found some of the translations questionable, but I am inclined to agree. Paño or cloth, being mentioned in the layout means it is not being made from leather.

Part 2: Digging through some Spanish and English Inventories.

*I did make a leather jerkin a long time ago out of chrome tanned suede cut from skirts from the thrift store. I looked like a badass female Iago in it, but I’ve learned a great deal about sewing since then.

The Mauritshuis collection Anthonis Mor van Dashorst (and studio), Portrait of a Man, 1561